There are a lot of questionable things I do as a mom. Avery got a kazoo at music class and sometimes I entertain her and Savvy (and me) with it by humming the tunes of some of the foulest, most inappropriate songs I can think of.  F— You by Cee-Lo Green is their favorite tune. They also like I Wanna “Love” You by Akon and Don’t Cha by The Pussycat Dolls. 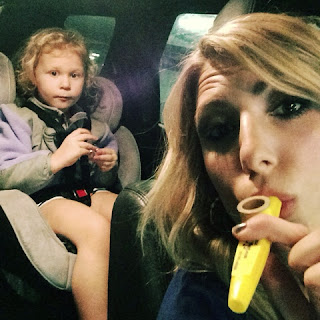 Whenever I accidentally say a cuss word (usually while driving) I quickly try to cover it up by following with a similar sounding word. This has resulted in Avery saying things like, “Ship!”, and “What the yuck?!”

I also tell my daughters they are pretty. Constantly. I call them “Princess” and “Gorgeous” as nicknames. When Avery was learning to talk, I taught her to tell me “Good job, Mommy!” after I changed her diaper just because it made me feel good to hear it from someone. I even taught Avery that when I say, “How did you get so cute?” she automatically responds, “I was just born that way!” Someone recently sent me the article Stop Calling My Daughter A Princess by a woman who has banned herself from calling her daughters “Princess” anymore for fear that it sends a harmful message. While I think each parent is entitled to their own philosophies, my personal reaction is, can we all just chill-the-“yuck”-out for a second about the Princess thing? When I tell my daughters, “you’re my Princesses” I’m saying, “you’re the most special to me.” I’m not saying “by your birthright you are considered by the general population to be above others in worth.” Sometimes I tie Avery’s blankie around her shoulders and call her a Super Hero. I’m not trying to lead her to believe she has supernatural powers, I’m just telling her she’s wearing a cape and she can run really fast and pretend like she’s flying. When Savvy falls down and doesn’t cry, I tell her she’s a tough cookie. Should I no longer use metaphors at all?

I guess I am equally shallow when it comes to boys and girls because I have always called my nephew “Handsome” and referred to him as a gorgeous boy ever since he was a little guy. (Sorry for brainwashing you, Kolton!) I haven’t seen any articles saying you shouldn’t call your son a Prince or tell him he’s handsome. There are a lot of amazing Princess role models out there and smart women who own their appearance. My favorite Princess is Elizabeth from The Paper Bag Princess. (It’s a must read, whether you have daughters or sons, nieces or nephews.) Kerry Washington as Olivia Pope is always gorgeous and impeccably dressed with men fighting over her but she’s also smart, successful and confident. She doesn’t become less powerful because she’s also beautiful and presents herself in a way that highlights it. (Okay, I am going down the rabbit-hole now and I can feel this turning into my KW/OP love manifesto…but seriously, SCANDAL!)

I actually heap all kinds of compliments on my children constantly (Kind, Funny, Smart, Tough, Beautiful, Clever, Helpful, Brave, and Strong are words they hear every single day. I also make a point to tell them that I’M all those things too. Not because I have an inflated sense of myself (which is probably debatable if you talk to my family, because I am the baby, after all) but because I think your kids pick up more on what you say about yourself than what you say about them. When I carry both my girls in my arms I tell them that I have super strength because I’m SUPER MOMMY! I also tell them that I’m really smart, much smarter than they are, but when they become mommies they will be as smart as I am too. (I also believe in teaching your kids accountability and how to not take themselves too seriously. When Avery misbehaves I don’t make excuses for her just because she’s my Princess.)

What I think SHOULD be banned is talking badly about yourself in front of children (notice I said children, not just your own children.) I think that’s a lot more harmful than building them up and even more harmful than talking badly about others in front of them (although that’s obviously not a great idea either.) If you want to know what your kids are internalizing, think of all the things you say to yourself that you heard your mother say to herself in the mirror or to her girlfriends when she thought you weren’t paying attention.

It REALLY annoys me when my daughter tells someone they are pretty and they say, “Oh, no, not as pretty as you!” Because THAT is what skews their reality. Just a confident, “thank you!” will do, ok?

My feeling is, the world is hard enough out there. Let’s build up our kids and let home be a place where we can feel adored without taking ourselves too seriously. Teaching confidence and humility are not mutually exclusive and being a Princess has nothing to do with whether or not you are a jerk. If my kids turn out to be total jerks it’s because they will be sarcastic as hell, (lookin’ at you, Dad) not because I called them Princess.

Then again I’m a grown woman with a crown, so what do I know…

…it makes me feel PRETTY!

P.S. Random thought here, do I have any British readers? Do you guys call your kids Princess or is that confusing because there really IS a Princess there? Would it be like if we called our kids “First Lady” as a nickname? Also, are your beauty pageant winners called “Queens” or do you guys automatically associate being a “Queen” with being an elderly world leader? Also do you guys still have Zoo Bar in Piccadilly Circus? That place is THE FUNNEST!